It’s that time again. Every four years, we’re treated to the spectacle of very rich, white men explaining how elitist and out-of-touch is the Democratic nominee for President. This time, instead of the scion of an oil-rich family, we have the husband of a multi-millionare heiress telling us that [the working-class black guy from Kansas is really a wanna-be celebrity][1]. John McCain, the BBQ Maverick, of course, only owns several houses and has served as a senator for 20 years. This is exactly the same as you and me. He is truly a man of the people.

There is an argument, of course, that anyone running for President is an elitist, since only 43 men have ever held that position. 43 out of several hundreds of millions is certainly pretty elite. But that’s not the real argument this time. It’s not that Barrack Obama isn’t part of an elite group. He is. Everyone who runs for public office is. Obama graduated from Harvard. Everyone who graduates from Harvard is part of an elite group. He earns more than 95% of the people in this country. That, too, is going to put him in an elite group.

But there is something more threatening about Obama–something more exclusive; something only 13% of the country can claim to be. And McCain is doing everything in his power to make you *get it* without saying it. Remember, [Obama threw a basketball into the hoop from behind the three-point line when he should have been visiting the troops][2]. They want so desperately to make us hesitate in the voting booth. “Don’t you know?” they whisper conspiratorially, as we’re about to make our decision. “He’s one of them!”

I was driving home from **Whole Foods**, (yes, I’m an arugula-eating elitist, too), when I saw this bumper-sticker: 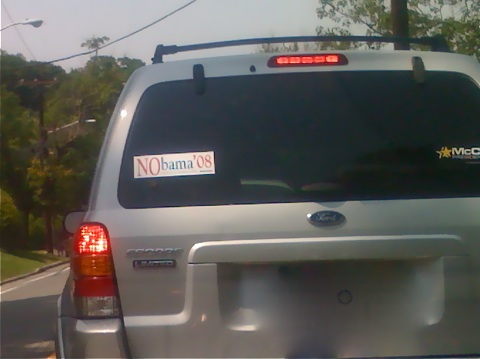 It says: “NObama ’08: Just Say No To Socialism in 2008.” I’m guessing the socialism that the driver was concerned with had to do with health-care and not public roads or the military. In any case, I think this bumper sticker fails, since it pretty much looks like they’re supporting Obama. The way it’s designed, it forces the reader to put the “obama” in “nobama.” The *n* just kind of fades away when I say it out loud. I’m sure whoever designed it, and whoever puts it on his SUV, he’s proud of his cleverness. “Huh. Huh. Nobama, huh, huh,” says [Beavis][3].

I was pretty furious with this car. Impotent, impotent rage, really. I’m sure this would please the driver to no end. But, socialism? What makes Obama any more socialist than anyone else in the government? Who was the party of ethanol subsidies, coal-mining subsidies, Fannie- and Freddie-Mac bailouts, and a thousand other bits and pieces of corporate welfare? I’ll admit it. I want my government to shore up the infrastructure of our nation, repair roads and bridges, regulate runaway markets and financial bubbles, and make sure things don’t get blown up.

Socialism? Christ! As if that’s our fucking problem!

I like Obama as a person. I like him as a politician, too, which doesn’t mean much, of course, but I like him as just a guy. He’s not *regular* folk, because no one is. But he’s inspiring and, so far, has been able to let his opponents say stupid things without mucking himself in their mud. He’s walking a fine line, because, as soon as he gets angry, he’s lost the race, if you’ll pardon the pun.

When he wins the election, though, I’m going to be very happy thinking of all the idiots whose [head a splode][4].

Here’s a parody sticker I came up with, expressing my feelings about the next 4 years. The sticker is available from Cafepress if you really want to piss your neighbors off, if they ever notice the difference.

Update: Hmm… a better idea has struck me. Put this sticker over your neighbor’s Hummer, and see how long it takes him to notice. Yeah. That’s the stuff.

Jesus is coming!
WZXV
99.7 fm
The frequency of Heaven

Recently seen bumper sticker:
The #1 Endangered Species?
The Pre-Born CHILD!
It’s a CHILD …Not a CHOICE!